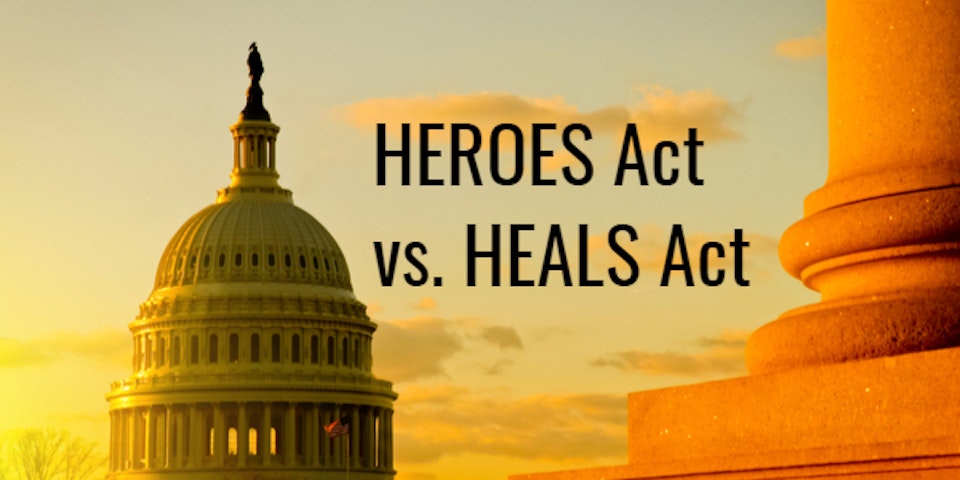 Late Monday, the Senate, in consultation with the White House, put forth the HEALS (Health, Economic Assistance, Liability protection, and Schools) Act. Some of the provisions of this $1 trillion dollar stimulus bill are:

One noticeable item omitted from the HEALS Act is the bipartisan provision to allow PPP loan expenses to be deducted despite any portion of the loan being forgiven. This provision is included in the House’s HEROES Act.

The HEALS Act will be debated with the House, which put forth the $3.5 trillion HEROES Act in May. The Senate has not responded to the HEROES Act and have referred to the bill as “dead on arrival” for months. The Senate, in conjunction with the White House, is not in favor of spending more than the $1 trillion proposed, citing the national debt and a recovering economy as reasons. The House disagrees, indicating that the economy and pandemic environment will be with us for many months to come.

Common ground provisions between the House and Senate include:

Significant differences in provisions that will likely generate the most lengthy discussions include:

It is expected that talks will continue today with the most pressing issue being the expiring unemployment benefits for workers. Many members of Congress have suggested that a short interim bill addressing only the unemployment benefits could be enacted to keep money going to the unemployed; however House Speaker Nancy Pelosi is opposed to this, feeling that it would diminish the House’s leverage on other parts of the recovery package.

It is anticipated and hoped that Congress can come to an agreement before they break in early August or at least agree to an interim solution for the unemployed to keep money going to the 30 million people still out of work due mostly to the pandemic environment.

We will continue to keep you updated. Should you have any questions, please don’t hesitate to reach out to your tonneson + co representative.